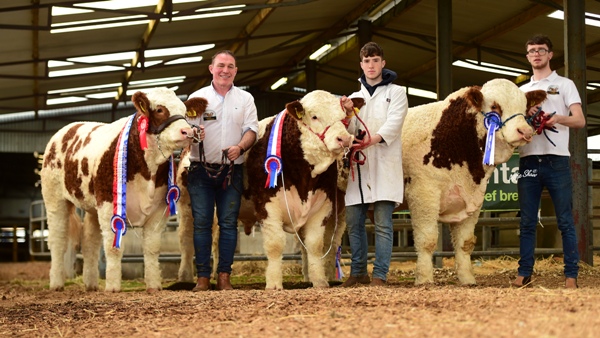 At the Simmental Society Premier Autumn Show & Sale which took place at Roscommon on Saturday November 3rd, the trade reflected the general mood in the beef sector with bulls being particularly hard sold. The females reversed this trend somewhat especially for the choice lots.

The bull section recorded a joint top price of €4100. First to hit this mark was the Overall Senior Bull Champion, Brideland Jaguar, exhibited by Ava O`Leary, Ballincollig, Co. Cork. This September `17 born bull was tapped forward by the Judge David Donnelly from the Atlow Herd in the UK from a very strong line up of bulls. Jaguar is sired by Woodhall Ferrari and out of a Kilbride Farm Newry dam Littlerock Dervela Annie and was purchased by Carlow farmer Billy Atkinson.

The Junior Bull Champion, Lissadell Jacob ET, was exhibited by Kieran & Paul Mullarkey, Ballinfull, Co. Sligo. At 11 months of age this December `17 born bull was sired by Curaheen Gunshot and is out of the Monaduff Snorter dam Tawley Gretta. This young bull was purchased by Clive Houdley, Lockerbie, Scotland at €3100 for his Manor Park Pedigree Herd.

In what was a great day for the Mullarkey Family they also exhibited the Reserve Junior Bull Champion, Lissadell Jupiter ET, a November `17 born Dermotstown Delboy sired bull who was out of a Curaheen Tyson dam Cladymore Edith. Clive Houdley was again the buyer this time at €2600.

Other notable prices on the day included:

Overall the bulls recorded a 50% clearance rate with an average price of €2520.

The Female section provided a better picture with an average price of €2700 and a clearance rate of 80%.

Garrett Behan, Ballyfin, Portlaoise exhibited the Junior Heifer Champion, Clonagh Jolly Glam Posh. This July `17 born heifer is sired by Clonagh Tiger Gallant and is out of a Kilbride Farm Dragoon dam Clonagh Glamorous Post and was purchased by Clive Houdley, Scotland at €5000.

Jennalyn Jellybean Nora exhibited by Lyndsey Behan, Ballyfin, Portlaoise was crowned the Yearling Heifer Champion. This August `17 heifer is sired by Clonagh World Class and out of a Banwy T-Rex dam Jennalyn Flora Nora was purchased by Clive Houdley at €5000.

The Reserve Senior Heifer, Auroch Juno P, was exhibited by the Wall Family, Newcastle, Co. Dublin. Sired by Sneumgaard Imperator PP and out of a Curaheen Dakota dam Auroch Fiona P this January `17 was purchased by Mark Orahoe, Longford at €1800.