The last Irish Simmental Society Spring Sale of the season was held in Tullamore on last Saturday May 8th. A year record price of €11,000 was achieved up from a top of €3,000 at this sale last year. A noticeable feature of the sale was the keen demand for the top quality lots with many potential customers going home without a bull having failed in an attempt to purchase some of the top lots.

In the female section, there was again a 50% clearance with prices ranging between €3350 and €1200 selling to an average price of €1850. Top price went to the reserve champion female “Broomfield Wee Nina” sold by Paul McArdle, Broomfield, Castleblaney Co. Monaghan. Sired by “Hillcrest Champion”, out of a “Jennalyn Luckyduff” dam and in-calf to “Omorga Volvo”, “Wee Nina” was purchased by Eamon McCluskey, Kilrea, Co. Derry for €3350. 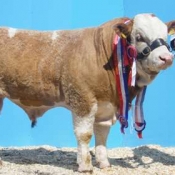 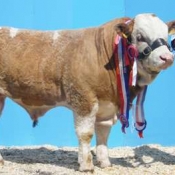 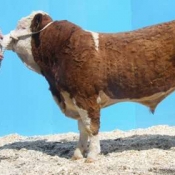 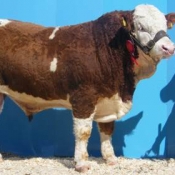 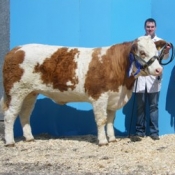