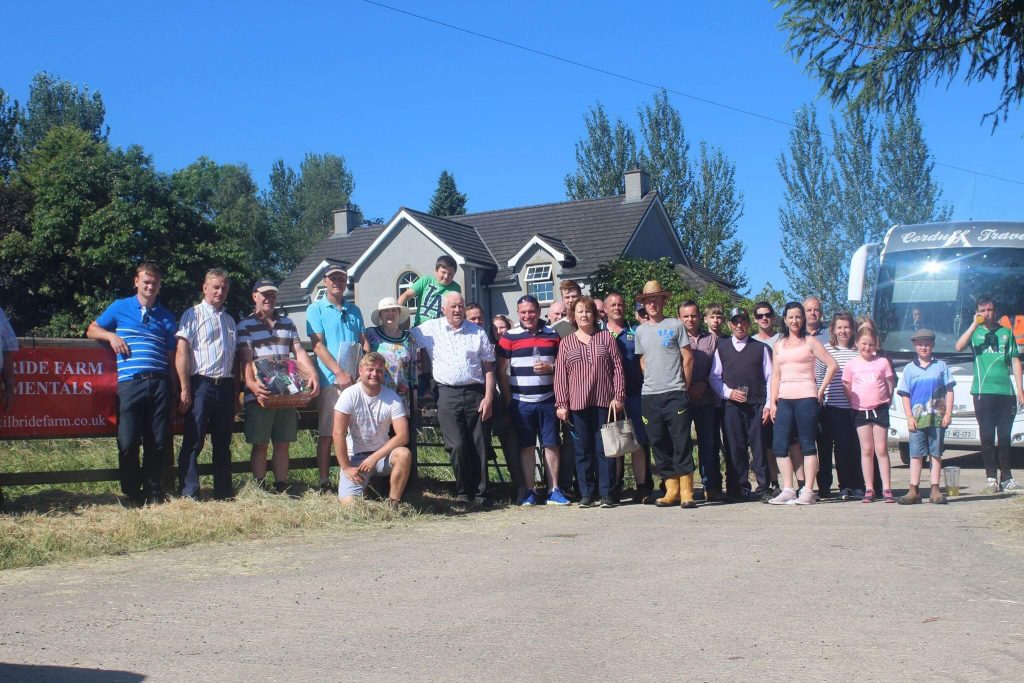 On a glorious Saturday afternoon in June members of the Western & North Western Simmental Clubs visited Kilbride Farm Simmentals. This farm is located outside the village of Doagh about 20 minutes from Belfast. The herd is managed by three generations of the Robson Family namely; Billy his sons Michael and Norman and grandson, Matthew. The farm consists of approximately 200 acres of land which comprises of 100 breeding cows and followers. 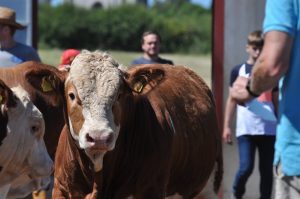 Before proceedings got underway Michael gave us a brief outline of their herd management and breeding goals. All decisions are made collectively by the family and agreements are reached after much deliberation. The herd is split 50/50, spring and autumn calving to facilitate the sales in Stirling in October and February. Bulls and heifers are also entered for club sales at Dungannon. The calving system allows for heifers born in the autumn to calve at 2 ½ years old in spring and vice versa for heifers born in spring herd calving at 2 ½ year old in the autumn.

Michael told us they base most of their decisions on beef performance which incorporates calving ease, growth rate, carcase quality, milking ability and fertility in a natural environment. Put simply he said they strive to breed structurally sound cattle with an ability to excel under commercial conditions. For the females he expressed his desire for a need of docility, good legs and feet, good plates, plenty of milk but with neat udders and good teat placement easily accessible for the newly born calf. 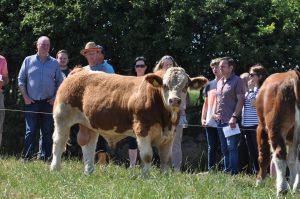 No meal feed is given to cows except a little to autumn calver’s prior to service. Heifer calves get little or no meal prior to weaning and breeding heifers none at all only silage plus minerals. The weaning system practised is that the cows are removed from the calves in groups of 3 to 4 on a gradual basis over a period of weeks until all calves are weaned. Every cow is assessed on her own production of a quality calf no matter what her ancestors may have produced in the past. There is a very strict culling policy and when we viewed the herd the conformity of all the animals, be it cows, heifers, ground bulls or calves it was there for all to see.

The health status of the herd is very important and with this in mind it was decided to forgo showing cattle at Balmoral Show or at any other venues throughout Northern Ireland during the summer months. There is some discussion ongoing on this subject so we will watch this space. As stated earlier all animals are uniform in type with cows being supple, athletic and excellent mothers. The quality was there to see as when confronted by the crowd of strangers they were good natured even though some were only calved a month or two. These working mothers were in excellent health as was all the stock we saw.

The breeding policy of the herd is predominately the use of stock bulls. These animals are purchased at sales or privately and as they say, they are always looking for an animal that will compliment their breeding strategy. Some home bred bulls may have semen taken prior to sale and is used in the herd sparingly along with the stock bulls, e.g. K.F Warren which has been used with great success, with bulls at Stirling selling at up to 18000gms (double action). 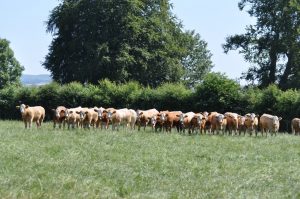 A lot of the Kilbride bulls are available down south through A.I. Newry Delboy, Dragoon etc and former stock bulls such as Cairnview Snazzy and Milnafua Graduate. Most of the senior females in the herd are sired by Milnafua Graduate, Cairnview Snazzy and Seaview Prince Charming. The younger cows are by Crugmelyn Brenin and a few heifers calved by Sneumgaard Imperator. All the different bull groups are easy to pick out within the breeding cows. Bulls being used in the herd at present with calves on the ground are Sneumgaard Imperator, although dead, semen was collected and Corskic Damario. Crugmelyn Brenin was a well muscled bull with good legs & feet and very docile and his females are of similar type with plenty of milk and breeding attributes. He has produced a string of top quality breeding bulls that are being used all over the UK and Ireland. Indeed we saw a particularly strong group of young bulls 8-10 months old by him displaying great breed, character, style, power, muscle locomotion and the all important docility when in the spotlight.

Sneumgaard Imperator PP was purchased in Denmark as a young calf and is homozygous polled. He is impressive in size but his muscle development is unique for polled genetics. In saying this he is very easy calving, delivering small calves, which take off growth wise as soon as they hit the ground. Imperator himself recorded a weight of 869kg at 13 months and his progeny are easily picked out within the herd. The heifers have excellent legs and feet length and temperament is in keeping with the herd profile. Young bulls are growthy with good muscle and easy fleshing. Corskie Damario (Greencap Ace) was purchased in Stirling where he was a 1st Prize Winner described as a bull with excellent bone and frame. He was bought also because of his softness, easy fleshing and good hair. He has a coat of long wavy hair rather than some of the bulls which have curly coats not desirable in breeding circles. His progeny are growthy with good bodies and style. The group of maiden heifers contained some, especially Damario animals, very good condition and growth. The bull calves were very eye catching with growth muscling length of hair and style. The day passed very quickly and we left the farm a lot wiser in relation to the business of running a Pedigree Simmental Herd.

We left the farm with great satisfaction and renewed vigour, taking the knowledge, that was so generously offered by our hosts, on board and hopefully putting what we seaw and heard, in use on our own farm. On behalf of the members from the Western Club and the North Western Club I would like to thank the Robson family for their hospitality and warmth that was extended to us.