Skip to content
Yoast SEO is not installed. Please add Yoast SEO to your site. 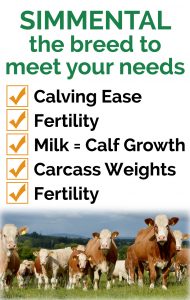 The Key Attributes of Irish Simmental are:

Simmental were first imported into Ireland in 1971 by very discerning cattle breeders seeing a key role for the breed due to its high beefing qualities.

This first importation of live animals came from Austria and was later followed by importations form Switzerland, Germany, France and UK. Embryos and semen has also been imported from Canada, USA and Demark. This has resulted in the Irish Simmental population being very diverse. Irish Simmental breeders have focused on the beefing traits of the breed while ensuring that adequate milk supply is not lost.

The breed has grown steadily in Ireland since its introduction driven by demand from commercial farmers and a desire by pedigree breeders to move the breed forward. Now there are on average 2,500 pedigree registrations per year. The strong trade for commercial replacements has resulted in only the very top end of pedigree females being registered and retained for pedigree breeding.

This has resulted in the Irish Simmental having very good shape while still retaining the maternal qualities to leave the breed as one of the most after commercial dams.  The role of the Simmental dam in the present National suckler herd is clearly visible with demand for quality Simmental heifer’s far outweighing supply. The popularity of the Simmental can clearly be attributed to her ability to calf any breed, having enough milk to maximise the performance of that calf. When high fertility and docility are added, it leaves Simmental in a very strong position within the National Herd.

Irish Simmental has been exported to the UK, Canada and the USA in the past. Recently there has been a strong interest from the countries of origin (Austria & Switzerland) as well as Denmark for semen from Irish bred bulls. It is the beefing qualities that are attracting this interest with many countries now seeing Ireland as an ideal source for Beef Simmental.

The Irish cattle Breeding Federation are now publishing all indexes in the form of Star Index both within and across breed. This has resulted in the Simmental Breed coming to the fore as the most profitable BEEF breed. Simmental is the most consistent breed across all traits.